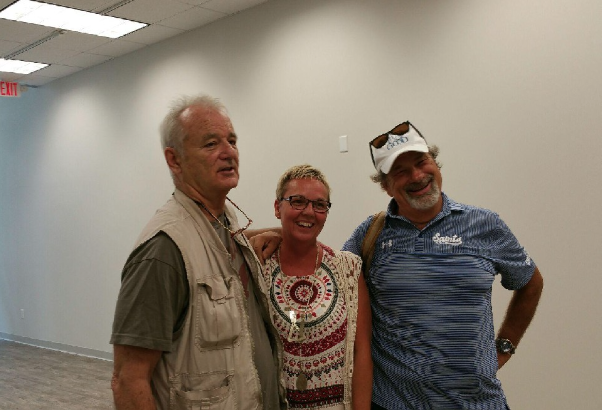 We were working at the new gallery space and anticipating giving a tour to our board member, Mike Veeck. We saw so much already done and so much left to do. Mike was leaving town that day so we hope he’d still have time to stop by but it was getting late. We were getting ready to leave and thought we saw Mike through the glass door. Bill Murray walks in with Mike trailing behind him smiling and laughing, “Hm, I got you!” Mike made introductions and said it’d be really cool if we could give Bill Murray, Mike, his wife, Libby, and one of the construction guys a tour. On the outside, I walked everyone through the space, showing the gallery space, classroom, and gift shop. On the inside, I was hearing Bill give suggestions about lighting and hoped I actually said things out loud and not only in my mind. I was excited to meet him and was surprisingly not star-struck. It meant so much to me to have him feel welcomed and be impressed that I felt the pressure of anxiousness creeping in. The bathrooms were a big deal. The city thought we needed two bathrooms – both accessible. So, I flung the door open and exclaimed, “Check this out! It’s accessible!” Hoping he didn’t think I meant that HE needed a bathroom just then. We all continued to chat and wander through the space. “What do you need?” Bill said all of sudden. Now, let’s remain in this moment … we HAD a wish list, we HAD needs – for sure! But, instead, “Bill, we could really use a ladder,” came out of my mouth. To be fair, there was a new artist installation which was going to be up that needed a really big ladder but still!?! Days later after telling this story more than a few times, a good friend suggested I send Bill Murray a note to thank him for coming by, letting him know that we did, indeed, get a ladder BUT would he be willing to judge the art from our annual Co-Lab project and select an artist pair recipient for a Bill Murray Choice Award for the public exhibit each year? “Yes!” said Bill Murray. So, we didn’t get a ladder; we got more of what we are – a lasting and strong community.”

From the bottom of our hearts…

Thank you so much for all of your continued support.